13 selected students from UPAD department has taken part in a DAAD co-sponsored trip to Germany. The two week excursion took place from 1st of November to 14th of November, where the first week was dedicated to the excursion around different German cities and the second week was dedicated to a workshop conducted by the chair of Urban and regional planning of RWTH Aachen.

The excursion started in Frankfurt moving to Hamburg, and then to the capital city Berlin, moving to Munich and finally to Aachen. One of the days during the stay in Aachen, the students had also visited Amsterdam in the Netherlands.

During the first half of the workshop the students analyzed and compared different public squares in Oman and in Aachen. They then moved on to the design task, where they proposed concepts for the improvement of a parking space into a vibrant and lively public space in Aachen. The students from Oman worked closely with International students studying at RWTH Aachen and thus gained an insight about different working methods.

The group was accompanied by Alexander Kader, Head of department and Dean of Urban Planning and Architectural Design at Gutech and teaching assistant Shaharin Annisa. 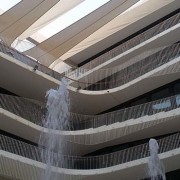 HALBAN The main campus building of the German University of Technology in Oman (GUtech), designed by Hoehler & Partner Architects, has been awarded internationally with the Design Award 2016 of the German Design Council in the category Excellent Communications Design – Architecture. “We are proud to receive such a prestigious international award for the architecture of our building. In the last couple of years GUtech building was awarded several times – by the Construction Week Magazine as the Best Commercial Building in Oman and later it was awarded in the same category in the whole Middle East in 2013, and in 2014 the building was awarded as the best Social Building in Oman,” said Dr. Hussain Al Salmi, Deputy-Rector for Administration and Finance at GUtech.

In a statement its jury members Mårten Claesson, Dr. Michael Peters and Stefan von Terzi mentioned: “GUtech, with its characteristic grid structure, has become a sight to see in the area of Halban, Oman and is an important part of the location’s cultural and economic development. The project was finished under budget in just 18 months and meets the highest standards of quality. It combines the cultural heritage of Oman with the high standards of German engineering, and is a wonderful example of the current and future identity of Omani architecture.”

GUtech architects are awarded among other international architects who were awarded for their design such as the ‘timber structure’ of the sports hall of the Kogakuin University in Tokyo, the exhibition ‘ITAMI JUN: Architecture of the Wind’ of the National Museum of Modern and Contemporary Art in South Korea and ‘Luminary’, the interior of an exceptional cinema in Hong Kong as well as a Split View Mountain Lodge in Norway.

GUtech is the only German University of Technology in Oman, located on the Arabian Peninsula. GUtech is the partner-university of the Rheinland-Westfälisch-Technische Hochschule – RWTH Aachen University. In 2007 GUtech started with 60 students and 30 staff members in two villas in Muscat and in September 2012 the university moved to its own campus in Halban. The campus is spread over 500,000 m², including three accommodation buildings. Currently around 1300 students are studying at GUtech. The university is planning to expand its campus with further faculty buildings, construction will start this year. 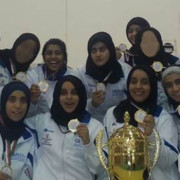 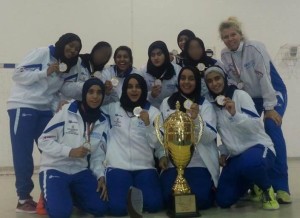 Last weekend, the Oman University Sports Committee held a female futsal competition at Al Amal Club, Muscat.
GUtech female futsal team won all the matches and defeated the team of SQU with a clear 3:1 in the final match. The best scorer trophy as well went to GUtech’s team captain, Basma Al Rashdi. Congratulations to the team and its trainer crew!

Oman University Sports Committee is preparing to send for the first time a female futsal National Team abroad. Five GUtech students were selected to train with the national coach, Haroon Al Bartamani from the Oman Football Federation, for the next 2 weeks. GUtech will host the first training sessions with coach Haroon at the sports hall. 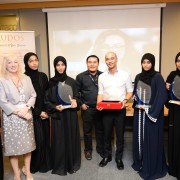 GUtech is the overall champion of the 1st Microsoft Office Specialist Championship which was held at, 27th of October at Exceed,

“Our students have done a great job! We are proud of them. We are the champion in three categories. Our students have shown that they can now compete at the international level, which is the Microsoft World Championship 2016 to be held in Orlando Florida,” said Revinson Martin, IT Lecturer in the Foundation Year at GUtech.

“Achieving beyond expectations is the core mindset at GUtech. I am personally pleased of our performance at the MS Specialist Championship. Congratulations to our participating champions and their mentors,” said Ahmed Al Salmi, General Manager of the Foundation Year Programme at GUtech.

Seven educational institutions in Oman have competed in the finals and GUtech students were the champions in three different categories:

The competition is 1st in Oman and in the Middle East (according to KUDOS). The competition is used to test the skills of the Omani students in Microsoft Word, Excel, and PowerPoint. At first, 60 GUtech students participated in February 2015 , who are also IC3 certified. They underwent series of assessments until we got the five best students who competed in the finals, said Revinson.