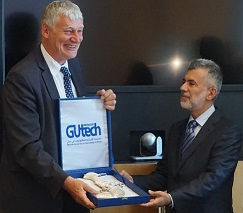 Two new board members representing the Omani Academia, H.E. Sheikh Dr. Al Khattab Al Hinai and Dr. Bader Al Kharusi, were welcomed to the board meeting. In addition, the BoG agreed to establish the position of a Deputy Rector for Research and Innovation at GUtech in the coming months.

The BoG meeting at RWTH Aachen University was the last meeting chaired by Prof. Dr.-Ing. Ernst Schmachtenberg, who will retire this month. On this occasion, H.E. Sheikh Abdulla Salim Al Salmi, Representative of Oman Educational Services LLC (OES) presented a gift to the Rector and thanked him for all his support during the past four years.

Initially, OES and RWTH Aachen University signed the first affiliation agreement  when GUtech was established in Muscatin 2006. The university opened its doors in September 2007 when 60 students started their studies at GUtech. In summer 2018, nearly 2,000 students were studying in the Foundation Year Programme as well as in various BSc and BEng programmes such as Applied Geosciences, Urban Planning and Architectural Design, Computer Sciences, International Business and Service Management, Logistics, Mechanical Engineering, Process Engineering and Environmental Engineering.