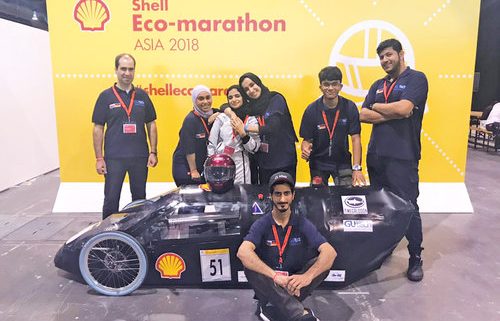 HALBAN The GUtech team ‘Megalodon’ has successfully completed the Shell Eco-marathon Asia  in Singapore last Sunday. With a final result of 118.7km for one litre the GUtech team achieved the 3rd place in the diesel category, behind universities from Japan and the Philippines. The team also ranked 17th out of 30 in the Internal Combustion Engine (prototype ICE). Their challenge was to drive as long as possible while using only 1 litre of diesel fuel. “Overall, we achieved all that we had aimed for, which were to pass inspection and get a few runs on track. Our final attempt recorded 118.7km per litre was okay for us,” said Neeraj Krishnan, Mechanical Engineering student and the team leader.

The GUtech team was the only participating team from Oman after the team from Sultan Qaboos University (SQU) had pulled out their participation. Initially, the Megalodon team passed all technical inspections. The weight of the vehicle was 75kg without the driver Iman Al Maawali. The female GUtech Process Engineering student drove the GUtech eco-friendly car.

“The student team lead by Neeraj have done a great job and largely improved the efficiency of the vehicle compared to previous years,” said Prof. Dr. Emmanouil Bouzakis, Assistant Professor at the Department of Mechanical Engineering at GUtech. The material for the body of the car used was different than last year but with the same diesel engine.

The Megalodon team was sponsored by Shell Oman and GUtech.

Caption: GUtech team Megalodon after the competition in Singapore

job fair, also referred commonly as a career fair or career expo, is an event in which employers, recruiters, and schools give information to potential employees. Job seekers

The GUtech team has dispatched their eco-friendly car to Singapore