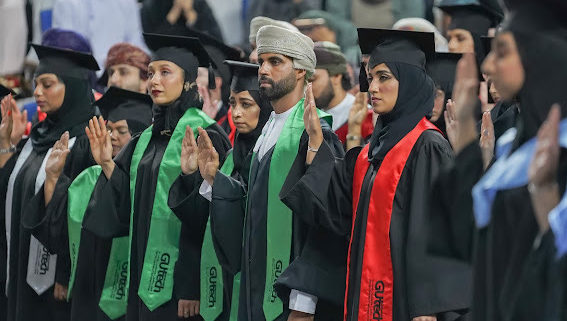 The German University of Technology Oman “GUtech” celebrated the graduation of the tenth batch, where certificates in various programs were awarded to master’s and bachelor’s degree students to more than 276 graduates for the academic year 2020-2021

Dr. Hussain bin Suleiman Al-Salmi, Acting Rector of the University, gave a speech in which he expressed his appreciation first for the vision of the late Sultan Qaboos bin Said – may God rest his soul-. Then he referred to looking forward to the bright future under the renewed covenant of His Majesty Sultan Haitham bin Tariq – may God protect him-. Dr. Hussein congratulated the graduates and commended their resilience in facing the challenges of the events that took place in the shadow of the Covid-19 pandemic during these two years, and urged them to take the initiative in facing all the events that may afflict this world, armed with science, the ability to adapt and openness to the new means of education and rapid changes.

Prof. Dr. Armin Eberlein, Deputy Rector for Academic Affairs, also expressed his sincere congratulations to the graduates for their success, hard work, and dedication despite all odds, and called on them to show a spirit of determination and ambition to achieve their dreams in the future and to set an example in their professional and social lives through their contribution to innovation and development. And to make positive contributions to their community.

GUTech students expo to shed light on life in Turkey

The “Green Vision” team from “GUtech” wins first place...
× Chat with Us on WhatsApp
X
X
Scroll to top