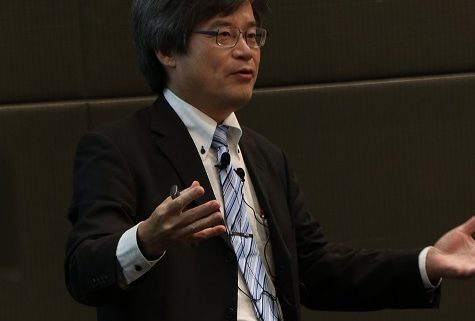 MUSCAT During an inspiring GUtech public talk by the Nobel Prize laureate (2014), Prof. Dr. Hiroshi Amano, held at the Kempinski Hotel Muscat last Wednesday, the Nobel winner called for an energy shift from oil-based economies towards renewable energies such as solar energy, reducing CO2 emissions by 80%. Prof. Amano stressed that an energy shift can prevent a further increase in temperatures worldwide. He and his research team are currently working on a long-term, interdisciplinary project to find innovative approaches towards developing a ‘Zero Emission Society”. Within this project, Prof. Amano and his colleagues have invented ‘movable offshore solar power stations’.  The so-called “Future Wireless Power Transmission Network” is an open innovation platform that develops sustainable, smart solutions for future energy challenges of our societies based on an Eco Research System. By using LED light, Japan reduced its annual electricity consumption by 7%. Today even in far reaching areas LED lights are used. A few years ago Prof. Amano visited Mongolia and was glad to see that LED lamps are used in the traditional Mongolian Ger tents.

Prof. Dr. Hiroshi Amano is a Doctor of Engineering and he is the Director of the Center for Integrated Research of Future Electronics (URFE) at the Institute of Materials and Systems for Sustainability (IMaSS) and he is the Director of the Akasaki Research Center at Nagoya University (Japan). He was awarded jointly for the Nobel Prize in Physics with Prof. Amano’s colleagues Prof. Dr. Isamu Akasaki and Prof. Dr. Shuji Nakamura in 2014. The three scientists received the Nobel Prize for their invention of efficient blue light-emitting diodes LED lights which have enabled bright and energy-saving white light sources.

Prof. Amanos talk entitled “Lighting the world with LEDs” and the “Internet of Energy” was held under the auspices of H.E. Dr. Abdul Munim bin Mansoor Al Hassani, Minister of Information, on Wednesday evening at Kempinski Hotel Muscat, Al Mouj. A number of dignitaries including H.E. Hilal Al Hinai, Secretary General of The Research Council (TRC) attended the event, which was organized by the German University of Technology in Oman (GUtech) in cooperation with Kempinski Hotel Muscat. Prof. Amano was accompanied by a delegation from Nagoya University (Japan) and the former Japanese Ambassador to the Sultanate of Oman, H.E. Seigi Marimoto.

Engineering student gave a workshop on ‘Building a Smart System’...