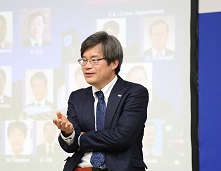 A GUtech Nobel Lecture  at the Kempinski Hotel, Al Mouj on 11 September at 7 pm

HALBAN Under the auspices of Dr. Abdul Munim bin Mansour Al Hasani, Minister of Information, the Nobel Prize Laureate in Physics (2014), Prof. Dr. Hiroshi Amano, will give a special Nobel lecture entitled “Internet of Energy” on Wednesday, 11 September at 7 pm at the Kempinski Hotel Muscat in Al Mouj. The Nobel lecture is open to the general public and organised by the German University of Technology in Oman (GUtech) in cooperation with the Kempinski Hotel Muscat. “We are very honored to welcome Prof. Dr. Hiroshi Amano as a distinguished speaker. Prof. Amano is not only an outstanding scientist, he is a great teacher and communicator, being able to make the audience curious and let them understand the subject of his scientific research,” said Prof. Dr. Ing. Michael Modigell, Rector of GUtech.

Prof. Dr. Hiroshi Amano was awarded jointly for the Nobel Prize in Physics with his colleagues Prof. Dr. Isamu Akasaki and Prof. Dr. Shuji Nakamura in 2014. The three scientists received the Nobel Prize for their invention of efficient blue light-emitting diodes which has enabled bright and energy-saving white light sources, LED lights. Prof. Amano initiated a network of scientists who works on the “Internet of Energy”.